What is more, we also breed with a few sport mares from other stud-books.

This maternal lineage originated at the Köhncke stud. The dam Aera by Norsius was the origin of the lineage 4539. Her great-granddaughter Gangsterin by Markgraf allowed it to expand more and more. Herself successful in sport up to the M level, this dam also gave birth to 13 foals, many of whom were successful up to the S level, in show jumping as well as in dressage. Now, her daughters Cesta by Sorgenbrecher xx and Dinant by Akkord ensure, through their descendants, the success and expansion of this maternal lineage. Today, show jumping horses such as Collin and Lordano can tie in with the success of Chin Chin as representative of this lineage. No less than eight stallions approved by German “Verbände” originated from it.

When Graf Kielmannsegg gave up horse breeding in 1981, Hans-Jürgen Köhncke was able to purchase the dam Eva by Ladykiller xx, full sister of the stallion Landgraf, as well as her daughter Oda by Farnese. This worthy lineage is nowadays perpetuated in Badendorf with Oda's two daughters, Eva-Maria by Constant and Feline by Contender.

Significant offspring of this lineage in our stud:

In Badendorf, the Ramzes daughter Basar was the origin of this maternal lineage expanded in Holstein. This blood line is perpetuated in Badendorf through her daughters Causa by Constant and Urfa by Capitol I.

Significant offspring of this lineage in our stud:

The dam Her Highness, by Sir Shostakovich xx/Constant, is the granddaughter of Kalinka, by Vollkorn. The latter was the full sister of Volturno, famous in Oldenburg. 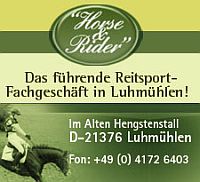